Transcript of swearing in ceremony of Judge of Appeal Storey QC 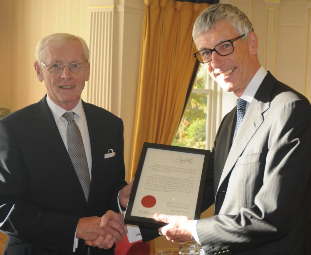 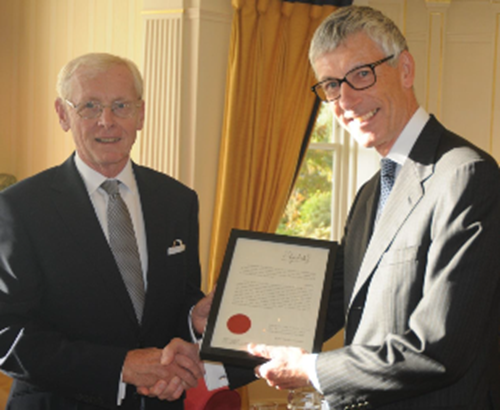 A transcript of the ceremony of the administration of oaths on the appointment of Jeremy Brian Storey QC as Her Majesty’s Judge of Appeal on Monday 9 October 2017 at 9.30am at Government House, Onchan
His Excellency the Lieutenant Governor Sir Richard Gozney welcomed all those present including members of the judiciary, the Attorney General, the Solicitor General, the President of the Law Society and William Cain, a former First Deemster.

Your Excellency that completes the short but essential formalities of this swearing in ceremony and it is now my opportunity to say just a few words. When those words “just a few words” fall from the lips of an advocate or a Deemster, that normally means at least 20 minutes because we do like the sound of our own voices, but this morning on this special occasion I give Your Excellency and all those gathered in this delightful, dignified and characterful space which has seen a lot of Manx history over many years, a promise. I promise that I intend to be no more than 5 minutes.

Your Excellency - this is an historic occasion for the Isle of Man. It is the first time in our long and proud history that a full time resident Judge of Appeal has been sworn into office. This is an important constitutional development.

Jeremy Storey brings a wealth of experience, legal knowledge, skill and wisdom to the Island and I am grateful to him for that. The Island is very fortunate indeed to have attracted someone of the calibre of Jeremy to our shores and I have no doubt that he will make an outstanding contribution to the progressive administration of justice.

This excellent appointment will significantly bolster the rule of law in this jurisdiction. It will greatly help us in developing Manx jurisprudence to suit our own particular needs whilst taking into account our responsible place within the world. It will also assist in promoting the Isle of Man as a jurisdiction which respects and acknowledges the true value of the rule of law. It will enhance confidence in the Isle of Man and its judiciary both locally and internationally.

I warmly welcome Jeremy, his wife Carolyn and their daughters Alexis and Sasha to the Island and I hope that they will enjoy their time here. In addition to the significant judicial commitments I also hope that Jeremy will take the opportunity, as I am sure he will, to further explore our wonderful Island with Carolyn together with new Manx friends.

Your Excellency, Your Honours, distinguished guests and friends, I thank Deemster Doyle for his very kind words.

It is an honour and privilege to be appointed the Island’s first full-time Judge of Appeal. I am conscious that I have big shoes to fill. From personal experience I know Geoffrey Tattersall was an immensely wise and considerate Judge of Appeal. I am only sorry that I could not be at his Valedictory last month. The Island will be a poorer place in his absence.

His predecessors, Ben Hytner and Ian Glidewell, were likewise eminent lawyers and served the Island with distinction. When I was sworn in as an Acting Deemster by William Cain 18 years ago, little did I think that I would be taking a further oath in 2017 before commencing my duties as the Judge of Appeal.

I was drawn to the Isle of Man by three things.

First, it was the location of my first ever holiday, aged two. My family lived in Chester and my mother, father, sister and I all travelled from Liverpool on the Steam Packet. I of course remember nothing of the trip, but I do have a tiny photograph of me standing by the ship’s rail in a white coat. My parents would later regale me far too often with the tale that this coat had taken a long time coming as rationing of children’s clothing was still in place. Unfortunately, I was to be sick all down my parents’ cherished purchase as the Irish Sea took its toll. I’m sure the holiday in Port Erin was wonderful in every respect.

Secondly, my Geordie grandfather spent some time during the First World War guarding aliens in an Internment Camp here.

Thirdly, Carolyn and I have a deep love of islands. I attended a school on Anglesey. We have had a property on the Isles of Scilly for 35 years. We got engaged in Jersey. My favourite court on the Western Circuit was Newport, Isle of Wight. I have worked in Hong Kong, Singapore, Mauritius, Trinidad and the Channel Isles and probably over half our holidays have been spent on islands.

I have always been treated with genuine warmth by Deemster Doyle and his two predecessors, First Deemster Mike Kerruish (whom I also had the pleasure of appearing before as counsel) and of course First Deemster William Cain. I have been given help and support in finding my way around the intricacies of Manx law and procedure. In my early days as Acting Deemster annual dinners were hosted in London and most of the part-time and full-time Deemsters attended, a tradition which it would be good to restore.

The Manx legal system seems to me to be in pretty good shape, due in no small part to the strength and high calibre of the Island’s well-resourced and respected legal profession, and its existing, manifestly independent full-time judiciary. The support staff within the General Registry, ably led by Stephen Cregeen, have been very helpful, friendly, efficient and effective.

This proud and unique Island has become a modern success story as a British Crown Dependency. Its standing in the international community is high and it is an active member of the Commonwealth. An international finance centre of only 85,000 people is obviously punching well above its weight. There is a clearly defined Manx identity based on a noble history and long established traditions and long may this identity develop.

2018 is the centenary of the creation of the office of Judge of Appeal by the Judicature (Amendment) Act 1918 which also amalgamated the offices of First Deemster and Clerk of the Rolls. This is surely a milestone worthy of celebration and I tentatively invite His Excellency to consider granting us all an extra Bank Holiday to celebrate in style.

Finally, and most importantly, I thank my wife Carolyn and my two daughters Alexis and Sasha for their patience and love and their unqualified support of my decision to accept the post of Judge of Appeal and to live and work in the Isle of Man. In Carolyn’s case this was a brave thing to do as she had yet to set foot on Manx soil. Having visited since my appointment was made she is delighted with what she has seen so far. For Alexis and Sasha I can only hope that their enthusiastic encouragement does not stem from a desire to have their parents overseas so that they can make mischief in London unseen and undetected.

I would also like to pay tribute to Della Fletcher, Christine Moreton and Joanne Taylor for arranging everything today so smoothly.

Undoubtedly challenges lie ahead for me, but I hope to meet them with a mixture of enthusiasm and diligence and even a dash of good humour whenever possible.

These are exciting times. I will always try to keep my feet on the ground and the interests of the Island uppermost.

I look forward to working alongside all the Deemsters, the High Bailiff and the Deputy High Bailiff whom I will support to the best of my ability. The good news is that you only have to put up with me for five years, a modest sentence in all the circumstances. Thank you very much. I am sure the Storey family will remember and cherish this day forever.