It was with great sadness that we learnt that His Honour Jack Corrin had passed away last weekend. I would like to say a few words to mark this sad event. 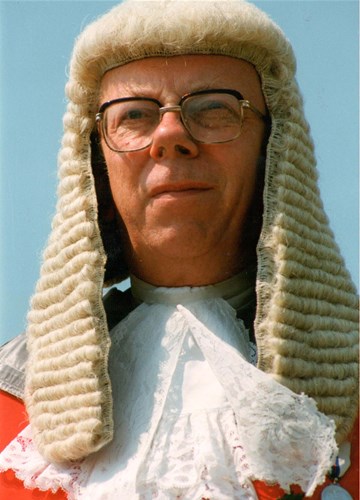 During that lengthy period of 18 years it is true to say that the nature of litigation in the Isle of Man was totally transformed. The burgeoning finance industry gave rise to a huge increase in litigation generally and in particular to the complexity of civil litigation. As First Deemster he had the onerous responsibility of dealing with these most challenging changes, which he did with conspicuous success.

There was also during his tenure a very significant increase in claims against government bodies by way of the doleance or judicial review procedure and he led the way in setting down with his usual clarity the Manx law and procedure in that area.

His judgments were a model of concision and were elegantly expressed, qualities which it may be said his current successors would do well to emulate.

He was universally popular with his clerks and court staff who remember him with very great affection and for his humour and humility. He was unfailingly courteous to both advocates and litigants in person, while always demanding the highest standards from the professional advocates who appeared before him.

One should not overlook the onerous duties attached to the office of Second Deemster who, in the 1980’s, had not only to deal with the most serious criminal cases with a jury but also had a regular diet of civil and family work. I well remember as a junior practitioner the sympathetic manner in which he dealt with my clients in family cases where he had a natural affinity with those undergoing the stressful process of divorce and separation.

It is also of significance that he was not afraid to draw upon case law from the Commonwealth in order to assist him in reaching the right and just result, an approach which prefigured the formation of what in certain areas is now known as a distinctly Manx common law.

One of his most important achievements for the administration of justice in this Island was to oversee the creation and opening in 1996 of the Isle of Man Courts of Justice whereby at long last the judiciary had proper, purpose built accommodation – a very significant improvement on the dilapidated set of makeshift buildings which had existed up until then.

Others will be able to speak more authoritatively of his selfless work for many charitable bodies. It suffices for me to mention his tireless work for the Manx Workshop for the Disabled and for Manx Blind Welfare. He was rightly awarded the CBE in 1995 in recognition of his years of public service to the Island. Personally I shall remember him as a proud Manxman with an exceptional sense of duty, a strong sense of justice and of fairness and also as a fine judge who has left behind him a remarkable body of judgments to which we shall continue to refer for guidance in the years to come.